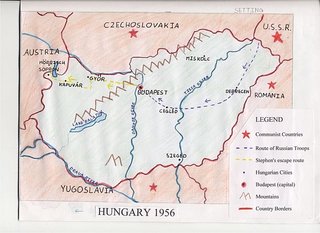 
The Honorable Helen M. (Ilona) Szablya is the Honorary Consul General of the Republic of Hungary for the States of Washington, Oregon, and Idaho based in Seattle.

Born and raised in Budapest, Hungary, she is the President of Szablya Consultants, Inc. a trade consulting firm for doing business in Hungary, translating and interpreting. Award-winning author, columnist, translator, lecturer, and former publisher of Hungary International, a newsletter for Americans about business in Hungary. She has two university degrees, speaks six languages, and lived in five countries under seven different political systems. The number of her English language publications exceeds 700 articles and five books, many of which won awards, Helen was President of the Washington Press Association (WPA) and received its highest award, that of the "Communicator of Achievement". The National Federation of Press Women (NFPW) awarded her with a National First Prize for Editorials and the First Affiliate Presidents Award in 1988. Helen was project director and co-author of Hungary Remembered, an oral history drama/lecture series; a project commemorating the 30th anniversary of the Hungarian Uprising of 1956 (major grant from Washington Commission for the Humanities). It was featured on world wide wire services in 42 languages. It won two international awards and the George Washington Honor Medal from the Freedoms Foundation. Helen was an "Inquiring Mind" lecturer for the Washington Commission for the Humanities about freedom related topics. Her book The Fall of the Red Star is about an illegal boy scout troop during the 1956 uprising. It won first prizes from the WPA and the NFPW. The book was published in Hungarian, translated by Helen, by Holnap Kiadó under the title A vörös csillag lehull. Grant from the Ministry of National Heritage (Hungary). Both versions were exhibited at the Frankfurt Book Fair, when Hungary was the honored guest. Helen is listed with Marquis Who's Who in America and several other biographies.

Helen Szablya and her late husband John, who was Professor Emeritus of Washington State University, and outside member of the Hungarian Academy of Sciences, have been living in the Seattle WA area. The couple has presented many hundreds of lectures on Hungary. They coauthored papers in the areas of energy affecting human culture and on translating/interpreting. The Szablya’s have seven children, 16 grandchildren and two great-grandchildren. The family was named HUNGARIAN FAMILY OF THE YEAR by the Hungarian Congress in 1981, in Cleveland, OH.

Five days before John’s death the couple received the Order of Merit from the President of the Republic of Hungary for their lives’ work, October 2005.